How to Survive, with Equanimity, a Dog’s Puppyhood, by John Bolinger 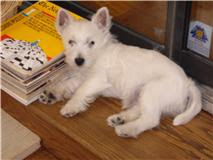 There comes a time during the first few weeks of having a puppy that the owner may consider calling an exorcist instead of a vet. The energy of the pup seems infinitely wild, and wearing him out in hopes of a quiet nap (mostly for yourself) often seems futile. My West Highland White Terrorist (Oops! Terrier) pup Dudley was eleven weeks old, and my ego sometimes suffered from not always being able to keep one step ahead of him. It hurt to be outsmarted by a puppy, who seemed during his rare quiet moments always to be plotting his next campaign. It was almost as though I could hear the voice in his little head saying, “Well now, I haven’t tried chewing on that leather chair. Nor Have I chewed up any more paperback books since I began teething on John’s copy of GOOD DOG, BAD DOG. Let’s see. How about that feather pillow on the sofa? Yum!”

Of course, terriers (i.e. Westies, Scotties, Cairns, etc.) are generally more highly strung than other dogs, and their “attitude” is something that provides hard work for the owner during training but rewards him later when the dog is more mature. You see, I’ve been through this before, but my memory failed to retain the fact that my last Westie pup experience (with Cody) was in 1995 when I was almost fifteen years younger.

To all those of you who are training a pup, I have some advice. The puppy needs lots of exercise as well as lots of rest, but you can decrease your own part in the exertion of running around the back yard like a chicken with its head cut off. There are two methods, which I discovered by accident only this past week. First, if you have a ceramic, linoleum, or tile floor with lots of space, give your pup an ice cube. He will, with some difficulty, chase it around the room until he or the ice cube simply melts or until the dog is exhausted. Again, this should in no way be considered a dirty trick on your part (well, OK, maybe a little one), but rather a way to conserve your energy while giving your pup his much needed exercise.

The other method of helping your pup to expend more of his own energy instead of the last remnants of yours is to give him a tennis ball. This one seems obvious, and I’m a little embarrassed to admit that I had not even thought of it until Duds was eleven weeks old, when I bought two tennis balls. You veteran dog trainers are probably snickering at my lack of know-how in this area, but I was completely thrilled to see that Duds went crazy with pleasure in chasing the balls around the sun room for almost half an hour. He never figured out that the balls didn’t actually have wills of their own, but the fact the they didn’t stay in place meant that he had to dash around the room trying to out-maneuver them, because they refused to stand still. Was that perfect or WHAT?

All this I observed from the comfort of my favorite chair until, at last, Duds went to his preferred nap spot and used a stack of New York Times crossword books as his pillow. I’ll include a photo of that very pleasant aftermath and remembering those active puppy days, plan a little nap for myself.