What to do if your dog swallows a squeaker, and other dog stories 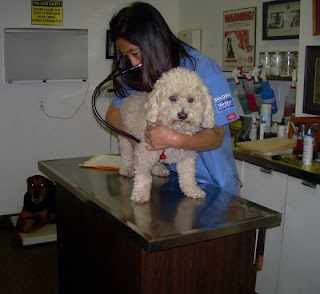 A few weeks ago, my dog Scout, an 8 year old 20-pound bichon poodle, (a politically-correct rescue, I might add) swallowed a dog toy squeaker. I’m an overprotective, hysterical type…anxiously called Friendship, Washington, DC’s vet ER….The only thing that kept me from rushing him to animal hospital was that it was late at night, I have no car, and would have had to call a taxi that would take pets; in a stormy night, getting the taxi would have taken hours. The Vet ER doc instructed to be calm, not bring him in, stop crying, and watch Scout for same symptoms that one would watch for in a human, for a G-I Tract obstruction: nausea, vomit, no stools, abdominal discomfort, loss of appetite, less active… Nevertheless, the next day, I took the frisky, happy Scout to our regular vet. Even though he was fine, our vet xrayed Scout 4 times, in 3 days, for more than $450…

For a 20-pound dog, it can take about 3 days, for a squeaker to pass through the G-I Tract. I learned to be patient, observant, and yes, gross, paw through his stools. Scout had passed the squeaker, and I missed it, despite my vigilance in scooping his poop. I also learned from the Vet ER that every dog will swallow something he shouldn’t at least once, despite how vigilant the dog’s human companions are… What to do next time: observe, and wait.


Annie…. , on to John’s story. His dog is the white dog, at right…
Remembering When Dudley Was a Pup

Only a dog lover, who has endured the sleepless nights of a puppy in his crate whining into the wee hours, as though he were trapped on Alcatraz (the puppy that is), can appreciate the rigors of turning an uncouth little canine into a civilized adult.

My Westie pup Dudley was nine weeks old, fast as lightning, and smart enough to handle the honors curriculum of most elementary schools. He figured everything out almost instantly and resided for a while in the heated sun room, where his crate was and where he was free to roam the ceramic floored space when I was with him during the day, making sure that he didn’t chew on electrical cords, wood items (splinters) or anything else the ingestion of which would harm him.

In fact,  Duds flew around the room, flinging toys so that he could chase them and arrange them into a pile, and I had already left my computer chair many times to monitor his cute savagery regarding the morning newspaper, a paperback book, a basket of logs for the fireplace, and the corner of a wicker table. He was a white blur of energy that seemed impossibly housed by a three-pound creature. There were times when he appeared to be going in more than one direction at the same time.

Using inkless newsprint paper, I taught Dudley to transfer his use of the paper to the dog run next to the sun room. When he did his business correctly, I praised him generously, even if it meant waiting in the cold morning air until it felt as though Christmas must be near.

The first morning he actually made a solid deposit and then a liquid one outside, I felt like Annie Sullivan having taught Helen Keller the key to language. It was a stellar moment worthy of a journal entry and a photo! I was so excited that I could even imagine that little Tootsie Roll-shaped item on the cover of a triumphant book. I’m fairly certain that my neighbor, seeing me over her fence gesticulate my joy, thought that any remnants of my sanity had flown completely away. This, however, is the stuff of dog training, and it separates us puppy owners from saner folk, though new parents come to mind with their myriad photos of tiny children doing things for which Mom and Dad believe Merit Scholarships are in order.

When Dudley arrived here that day two years ago (after my having driven over sixteen hundred miles to Tipton, Iowa and back to get him), I was willing to retrieve toys for him to make sure he was properly occupied, chewing on stuffed monkeys instead of my books. I then sank to a lower level, one that entailed a bit of guilt. Having reached a state of semi- exhaustion, I began sitting in the sun room rocker and throwing a pile of stuffed toys one at a time, some of them on strings, so that Duds had to do all the work, enough at least to wear him out to the point that he needed a nap, which in turn allowed me one too. Anyone who believes this is a dirty trick on my part has never owned a puppy and trained it with any seriousness.

To all those wonderful, dedicated, and slightly batty people out there who are training pups, have done it, or who are considering the surrender of a good part of their reason in order to do it, I say God bless you! My thoughts are with you on your journey to whatever sense of fulfillment comes from this endeavor. But I ask you also to look at your puppy when he’s asleep, peaceful and quietly content, and remember again why having a wonderful dog is such an amazing gift. It is all worth it.