A Letter to New Teachers by John Bolinger

I was just remembering in some detail about the autumn that I decided to retire.  The decision came all at once, it seemed.

I taught in a junior college for several years at night but also taught full time for thirty-five years in a local high school.  I taught English and French.  Those years were rich in the experience of being with people, and having taught over seven thousand students, I can now say that they were very wonderful years, years that kept me young in spirit.  I helped to write the curriculum for freshmen and for seniors in language arts, designed the Creative Writing program and took my students of French to France.  That part of my life is filled with hundreds of stories that are beautiful, sad, humorous and quite touching.  I was in room 242 most of those years, a room on the second floor facing the football field to the south.  It was like a big terrarium, hot in spring and fall and frigid in winter…but a good portion of my heart will always remain there.  My identity during all that time was that of a teacher.  That was who I was when people asked what I did.  I have stayed in contact with many of the students I had over all those years and had many whose parents I also had taught.  The sense of community that afforded gave me a feeling of continuity and stablility in a career in which most people don’t last more than five years anymore.  I had excellent classes for the most part.  The fall of 2003 I tackled a special English class of problem students.  It was a freshman class with people who had behavioral problems, including past expulsions.  This is the one story I must tell to help new teachers understand the meaning of all those years to me.  It is a kind of microcosm that speaks of my love and respect for the profession.  It will help to know me better and perhaps to undertand better what teaching gives back.

It was a remarkable day in late September.  Every day is remarkable in its own way, but I was touched by something unexpected during my last class of the day.  Because it was Friday afternoon and the end of the school day with my most difficult class (the leather-jacket juvenile delinquent crowd I have already mentioned), I was feeling sorry for myself, thinking as I watched them taking their Friday vocabulary test that I was not really reaching them as I had hoped to do.  I saw my refelction in a big mirror that I used to keep tabs on everything that went on in the room even when my back was turned. My face looked sad. Though the rest of the day had been very successful and most enjoyable in my other classes, I was focusing once again on what I felt was a failure on my part to inspire everyone in the room and have them excited about what we were going to be doing after the test.  Then there was a knock on the door, and a messenger from the main office delivered a package to me that had just arrived.  My students were distracted by the interruption (always an arduous task to get them back on track after ANY distraction, even a sneeze).  One bold kid in the front row (the one who was proud that his brother was in prison for armed robbery) asked who it was from and what it was. 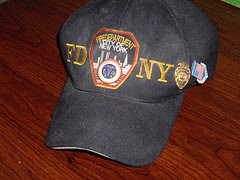 I read the return address and said that the package was from a former Morton student from many years ago (thirty-four to be exact).  One kid joked that it might be a bomb, but I replied that I was going to open it anyway and that we would all go up together…like bottle rockets.

Their curiosity was aroused by now, and excuses for distraction aside, they were genuinely interested to know the contents.  I opened the box to find a five-page letter from that former student , who was a trucker for twenty-five years before opening his own mortuary near Stanford University.  He had been in a “problem” class just like the one I was teaching that hour…a “basic skills” English class.  We corresponded over all those intervening years, and he continued to send me news about his life, including, at last, pictures of his grand children.

He wrote a book about his travels as a trucker across America.  He worked for several months after 9/11 at Ground Zero clearing debris and corpses. He worked with the New York city Fire Department and Police Department as head coroner. In the box was the cap he wore during his work there.  It was covered with dirt and badges for his valor.  it was the thing of which he was most proud.  The letter said that I had always been his favorite teacher and that he still thought of the ways I had inspired him to be his best even though he was now fifty-one years old.  He wanted me to have the cap, because he was proud of it, and I was his hero in a time when the world was calling him a hero.

My eyes filled up as I looked at it and explained to the class what it was.  They were absolutely silent (perhaps the first time they had ever seen a teacher cry).  The bell rang and they left quietly (as they had never done before).  Maybe they too were touched by what had occurred.  I don’t know.  It may be that they were simply shocked by my reaction.  It didn’t matter.  I had not been so moved in a long time by a gesture like that gift.  It came at just the right time to let me know that teaching had indeed made a difference and that there were influences that continued long after students were gone.  I felt quite blessed.

I’ll post a photo of the cap later.  The smudges of dirt probably won’t show up, but it will be added to my collection of teaching memorabilia.  By the way, Jim had heart surgery two weeks after he sent me the cap and died October 23, 2003.  I retired the following spring.