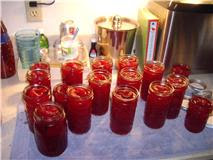 This recipe is much easier, than it sounds.  Most pickling ingredients, including jars, can be found in grocery stores.

Large cucumbers, peeled, sliced into rings and cored.  They may also be sliced into spears if you prefer.

Soak 24 hours in the following mixture:

This recipe will do about 2 gallons of sliced cukes.

Drain and wash well, being careful not to break the pieces.

Drain well and throw away the liquid.  Rinse the cukes.

While the cukes are simmering, make the following syrup:

Cook until the sugar and candy are melted and mixture is boiling.  Pour over the drained cukes.  Let set overnight.