Posted on August 27, 2011 by John
…Musings about an old acquaintance…Charles Tidler… is a Canadian poet and playwright, who grew up in Tipton Indiana, attended Sharpsville High School, and graduated from Purdue in 1968; with 11 plays, produced all over Canada, tons of awards, he is hailed as one of Canada’s most original poet-playwrights. 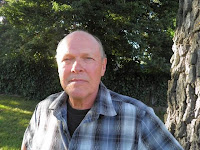 When I was at Purdue, he had graduated, hung around campus, an arrogant arse, holding forth about writing, philosophy, bewitching us like Scheherazade, waiting re: Viet Nam War.  He produced an ‘underground’ lit mag, Wordjock, did off-campus poetry readings, smoked a lot of weed, and other stuff, and dated beautiful women, including Carol Ewing, a blond sorority girl, from Marion, Indiana, friend of my friend CeCe, a seemingly mismatched duo.
During Christmas break 1969, Charles borrowed my off-campus apartment, when I went home,… his last stop en route to Canada, to escape draft. When I returned from break, a day early, and found his open suitcase filled with my books, like my beloved Letters to a Young Poet, by Rilke, I was livid!  I vividly recall Carol trying to calm me down, “Now, now, Charles didn’t mean it.  He needs the books: he’s going to be a famous poet.” We naïve Purdue girls, like rock-musician groupies, believed that artistes were allowed to do things, like steal from each other, both possessions, and their creative ideas, writing fragments, for the good of art, which was for the betterment of society.  But-t-t- …my books, bought by hard-earned money, babysitting (bratty, precocious) professors’ kids, and cleaning their houses!  I never forgave Charles Tidler, for not regarding me.  I think I was also self-righteously annoyed that he escaped to Canada, to avoid the Viet Nam war, but never involved himself with campus anti-war protests, meetings, groups.
Carol followed Charles to Canada, probably an extreme act of Purdue rebellion, that shocked many, and I heard, estranged her from her parents.  In the mid-1970s, my friend CeCe, Carol’s friend, said that she had heard from her… that she and Charles were so poor, that they ate seaweed, found on the beach, and had to live on Vancouver, BC beaches, for awhile, and that they had a baby son. Always wondered if the marriage lasted, if Carol returned, to the US, what the baby grew up to be.
In May, at a student poetry-and-jazz performance I attended, here in DC, Charles Tidler’s poetry was performed, a kind of talking-jazz-blues-fun piece… Astounded to find that it was indeed THE Hoosier Charles Tidler, the Purdue University bad-boy! Although he is not well-known here, he is considered, in literary circles, to be one of Canada’s most original and best…

I found an April 2011 Lafayette Journal-Courier article by Tim Brouk, about Charles Tidler, re: his latest book, Hard Hed — The Hoosier Chapman Papers, in which he wrote about Purdue and West Lafayette.  (http://www.jconline.com/article/20110819/ENT15/108190306/Take-5-Charles-Tidler)…

In the article, he stated that as a young man, he couldn’t get out of Indiana fast enough, but,  “as an adult — a senior citizen now — I keep coming back. All my books say “I’m a Hoosier in Canada.” Even a rolling stone has roots somewhere.” I feel the same way…but I still don’t have the courage to go back to Indiana… Charles told the interviewer, that he loved Indiana’s blood-soaked history, enigmas, contradictions, the people, which he called the friendliest in North America. Carol is no longer Charles’ wife, but no mention of wife, or family, in his article. He is married, has two sons, lives in Victoria, BC.
I requested Hard Hed, from DC Public Library; will review, when I get the book. I would never spend money on any of his books.  Am not convinced that poets and playwrights, who, at 21, are thoughtless egomaniacs, improve  that much. Nevertheless, I admire him, for putting in the hard work, sticking to it, despite countless rejection letters (I’m picturing my bathroom wall that I wallpaperd with rejection letters, before I quit.)

Below is a list of works, by Charles Tidler, Indiana writer.

PLAYS & BOOKS, by Charles Tidler, most of which are available on Amazon: