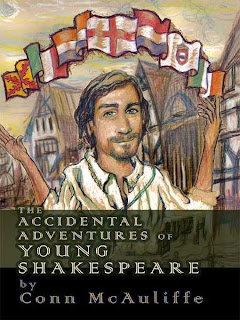 In 2010, the late Conn McAuliffe, Indiana writer, educator, and textbook writer, published a hefty 788-page novel on the young Shakespeare, a fast, fun, and imaginitive read, mostly in dialog, between the young Shakespeare and a character named Malachi. I’m still reading it… learning a lot of history….


This is a good adjunct, to the study of Shakespeare. I would highly recommend this, as a good resource, for any educator, re: background info, for lectures, and materials, for lectures… This book is an entertaining way of presenting the political, religious, and sociological history of the era. For young readers, who can’t get into iambic pentameter, rhyming couplets, blank verse, chapters of this big work, could hook the young reader, … gently.


The lovely cover artwork, and design, was the work of Conn’s nephew Luke McAuliffe.

MUCH ADO ABOUT A MYSTERY…


What happened to the real William Shakespeare in his twenties? How did a rustic lad disappear from historical records in 1585 and burst into view on London’s stage eight years later transformed into a playwright sophisticated in the complexities of political, social and romantic intrigue?


This wildly imaginative yarn with a strong historical flavor follows young Will on tantalizing and comedic adventures with spies and scholars, a plot to kill a queen, treachery in foreign lands, poetic interludes, battles at sea, encounters with great minds, and the carnal, bloody and unnatural acts Horatio later speaks of in “Hamlet.”


In pursuing their secret duties, William and his mentor, Malachi, trade quips and quotes with a wide range of their contemporaries from Marlowe to Montaigne, Spenser to Cervantes. Their spirited and humorous exchanges from the back alleys and battlefronts often preview lines we will hear later in the work of the mature Shakespeare.


One reviewer comments: “What a roller-coaster….spies, intrigue, torture, duels, queens, cannons, fighting sail & romance…but above all….HUMOR (prepare to be amused)…history as it could have (might have?) should have been!”