Posted on August 24, 2011 by John
From Tom Brokaw’s Boom:
“If you thought something good came out of the Sixties, you’re probably a Democrat; if you thought the Sixties were bad, you are probably a Republican.”
— Former President Bill Clinton
Thought you might enjoy reading another installment from John’s book, Come on Fluffy, This Ain’t No Ballet, to help soothe any raw nerves, from today’s east coast earth quake. Is anyone curious about Fluffy? Don’t you want to know about him?  Get the Kindle version from Amazon.
Annie
Chapter 10 Politics, Algebra, and Gossip
The presidential election of 1960 was the first of which I had much awareness. When Eisenhower was elected in the early 1950’s, I was only six years old. At home in 1960 my family and I watched the Kennedy/Nixon debates on our black and white television set, and I remember only that something about Richard Nixon didn’t ring true to me, because everything he said sounded prepared or even memorized.
My Aunt Hazel and Uncle Walter, staunch Republicans, paid me five dollars to wear a Nixon campaign button to school for a whole week, and as a fourteen-year-old, I thought five bucks was a huge amount of money. However, I wore the button to school only once, as it seemed every other kid wearing a button wore one for JFK. When cute Shirley Bodner offered to give me a JFK button, I immediately put the Nixon one into my back pocket in order to fit in better with my peers. 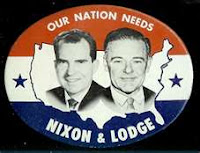 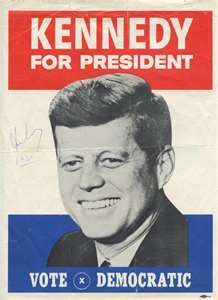 None of this had anything to do with actual politics. Once again it was all about image. Jack Kennedy seemed younger , more confident ,and more articulate than Richard Nixon, who appeared to represent more of the same old thing from Ike’s eight years as President. Change meant some excitement, and to us fourteen-year-olds, that was a good thing.

Not wanting to disappoint Aunt Hazel and Uncle Walter by revealing my betrayal of the Republicans, I continued to wear my Nixon button whenever I was around them. Despite feeling two-faced about the whole thing, I never returned the five dollars. That decision was based upon the rationalization that if my aunt and uncle were prepared to bribe a future voter or attempt to buy votes for Nixon, they were as guilty of political graft and corruption as I was of being a freshman hypocrite. As it turned out, I spent all five dollars over a period of two weeks on sodas at the Walgreens on Hohman Avenue in downtown Hammond. Guilt did follow me, however. When Nixon lost the election, I felt personally responsible, as though my not wearing his stupid campaign button had made him lose. Sodas after that election never again tasted as good.
The Kennedys made me feel proud to be an American. Their taste, style, elegance, eloquence, and beauty were lavish in the media, and no one could ever forget January, 1961 on that very sunny but bone-cracking, cold day watching the inaugural speech in black and white and hearing those immortal words, “Ask not what your country can do for you. Ask what you can do for your country.”
Despite the cold day and the cold war with the Soviet Union, I felt happy that the President and his beautiful and accomplished wife, Jacqueline, represented us on the world stage where, by contrast, Premier and Mrs. Khrushchev looked like Mr. and Mrs. Potato Head. By the spring of 1961 even the Sears catalog had pill-box hats, Chanel-like suits for women, and sheath dresses. Girls at school were already copying Jackie’s daytime bouffant hairstyle. The problem was that some girls copied Jackie’s evening formal do with hair piled high in elegant but inappropriate swirls that didn’t really go with pleated plaid wool skirts the girls wore to school or the white tennis shoes with white anklets. The result over the next two years was that hairdos for girls became quite large, so that some, like Wanda Jenkins and Judy Sabo looked top-heavy, and wearing those tiny bows in front made it look as though the whole giant wad of hair was being held in place by the miniscule piece of ribbon, which might give way at any moment so that all that hair might just give way to fill the room with the ratted thatch.
I also felt proud, because of the Kennedys, to be of Irish descent on my mother’s side. Despite Joseph Kennedy’s shady amorous and business dealings going back to the 1920’s, the Kennedy family did become the closest thing America had to royalty. My Irish connection, remote as it may have been, somehow made me and my Irish friends and relatives feel a little closer to Hyannis Port and Martha’s Vineyard, and even the White House. I knew nothing yet of Vietnam, and the Cuban Missile Crisis was a year down the road. Life was good.
As an aging baby boomer, if I ever feel elderly and begin to regret my lost youth, all I need do is to remember algebra class. It all looked like Egyptian hieroglyphs to me. Everything about algebra mystified me, and I never cared a rat’s behind what the unknown was. In fact, algebra itself was for me the great unknown, a vast and incomprehensible experience that no painting by Hieronymous Bosch could ever capture. Nightmares came to me often of a big black, masked “X” pursuing me to demand I correctly identify it. Being in algebra class was like being the victim in Poe’s story, “The Pit and the Pendulum.”
I lived in absolute terror of being called on in class for fear of my blithering answers becoming new fodder for class gossip. I never actually cut class in terms of going to Dairy Queen instead, but I did fake illness a couple of times to avoid quizzes. Factoring, graphs, bell curves, and all those unknowns chewed my brain cells to nothing. Mr. Graham, our teacher, was sympathetic only in his complete lack of awareness that anyone could not see how easy and full of fun algebra was. Almost everything he said seemed an absolutely foreign language to me.
The meaningless squawks of teachers in Charlie Brown cartoons express perfectly the way I felt in that classroom. Poor Mr. Graham wanted so much for me to understand, and he tried everything short of sign language to help make things clear to me. Even his tutoring me after school came pretty much to nothing, due partly to the distractions of his very thick eyeglasses, which any boy scout would have coveted for starting fires in the wild, and his herringbone tweed jacket, which contained more chalk dust than the White Cliffs of Dover. Whenever he moved his arm to make a gesture or write on the black board, white clouds would billow up from previous months of chalk usage that somehow became stored in the fibers of that frightening sport coat. It seemed hopeless that either of us would ever enjoy any success on the conveying or absorbing end of algebra. I was his Helen Keller, and he was my Annie Sullivan, except that in our case, I remained deaf, blind, and mute without anything ever clicking in my head to help open my brain to what he saw as the vast and endless joys of algebra.
There were, in fact, only two things that helped to make algebra class endurable. I sat in the back of the room, and Brenda Sanders was to my right. Algebra was child’s play to her, which for a while made me suspect that she was some kind of extraterrestrial creature merely posing as a freshman at Gavit High. She was, however, lots of fun and would often try to explain to me our algebra homework. 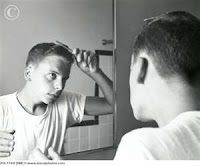 Some days Brenda would bring a candy bar to class and split it with me on condition that I play “Camptown Races” on the rubber band of my retainer, which when plucked, made a sound like a Jew’s harp so that changing the shape of my lips in larger or smaller circles, I could use a real musical scale. On a really good day I could even manage “Oh, Susanna.”