Today is the first day of school for public school students in Washington, DC, and probably everywhere.

In the introduction to his book, Boom! Voices of the Sixties, Tom Brokaw quotes John Lennon: “The thing the sixties did was to show us the possibilities and the responsibility we all had. It wasn’t the answer. It just gave us a glimpse of the possibility.”

John commenced his high school education in 1960, the beginning of the era of possibilites and responsibility, to which Lennon alludes. Below is a section exerpted from Come on Fluffy, This Ain’t No Ballet.  Enjoy!

You can buy the Kindle version of John’s memoir from Amazon, www.amazon.com/dp/B0056UF30G.
Annie 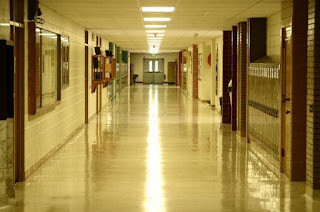 In 1960, school started the Tuesday after Labor Day. We were back in Hammond by then, where my parents had bought a house just before Grandma B’s death. After moving, we had just enough time to buy some school clothes before enrolling at Donald E. Gavit High School. All the clothes I ever wore in high school came from Sears, Goldblatt’s, and Carson Pirie Scott and Company. They were the department stores, where almost everyone I knew bought everything he had ever owned. Cotton slacks, short sleeve dress shirts for early fall, socks, a beige cardigan sweater, an argyle pull-over sweater, underwear, and a pair of gray Hushpuppy shoes were the items Mom bought me that day. I was, or thought I was, ready for high school.